TOKYO — A new trend is emerging in global stock markets as investors began to shift focus from globalization to a “divided world” after the Russian invasion of Ukraine. Shares of once-highflying tech giants have slumped, while those in more mundane sectors like energy and agriculture are performing well.

The two strategists were on the mark as investors began to accept the bank’s view that the Ukrainian crisis will bring profound changes to the world economy. Among U.S. stocks, shares of EQT, the country’s top gas producer, rose 2.2 times between Feb. 23 — the day before the Russian invasion — and June 9 on expectations that it will boost exports to Europe, which has been eager to reduce its reliance on Russian gas. 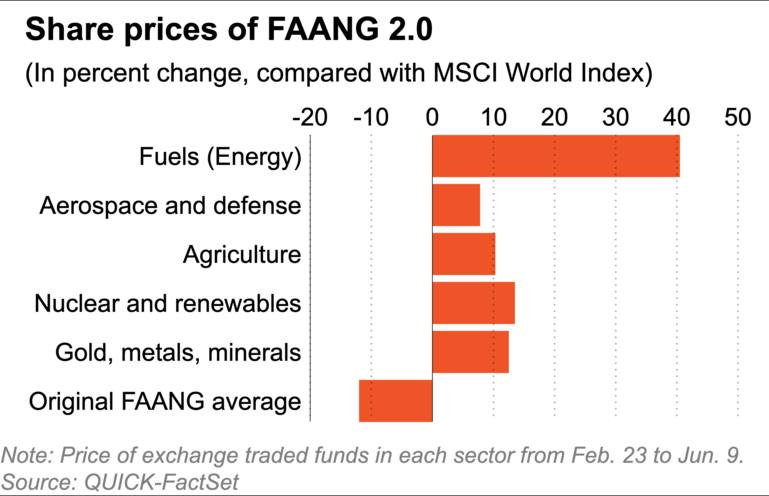 Major exchange-traded funds in the five sectors covered by FAANG 2.0 have outperformed the market by 17 percentage points on average since Russia’s invasion, showing a sharp contrast with the original FAANG’s underperformance of 12 points. The stock price of Netflix, hit by its first-ever drop in subscribers, fell 50%.

Companies in these five sectors are also expected to see improved earnings. According to QUICK-FactSet, analysts forecast that earnings per share in the four sectors of integrated oil, aerospace and defense, agricultural commodities and milling, and precious metals will increase through 2024. While nuclear power is not included in the forecast, per-share earnings in the sector are expected to remain strong. 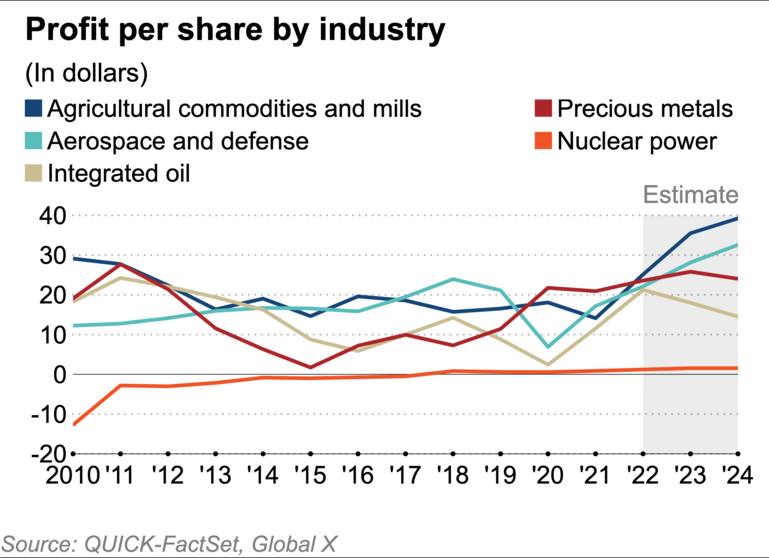 The group’s long-term outlook is improving as well. The World Bank in April hiked its energy price index for 2024, revising its October 2021 forecast of 84.4 to 110.8. The index covers oil, gas and other energy prices. Its projection for food prices was also raised 15% from the forecast issued before the Russian invasion of Ukraine. Defense intelligence provider Janes raised its projection of global defense spending for 2025 to $2.22 trillion from $2.15 trillion.

Following the end of the Cold War in 1989, goods and services began to move beyond national borders as did investment money. “Big IT companies benefited most from globalization,” said Shinichi Ichikawa, a senior fellow at Pictet Asset Management (Japan).

But many investors began to see the Russian invasion of Ukraine as the beginning of a new Cold War. “Over the next 10 years, the world economy will face the same kind of inefficiency as during the Cold War,” said Masayuki Kichikawa, chief macro strategist at Sumitomo Mitsui DS Asset Management.

In a divided world, prices of fossil fuels and certain farm products tend to rise due to their limited production bases. Businesses will also have to consider national and other security as a variable to determine management policy.

FANNG 2.0 companies feed on these additional costs of navigating the new reality. Hence, the recent outperformance of their stocks does not bode well for the world economy, analysts say.


The above content is from google feed with the source link mentioned. If you wish to remove the content from here then contact us and it will be removed within 24 hrs.

Topline An emerging outbreak of